George Formby into The Banjo Hall of Fame

Well I may be battling jet-lag from my long weekend in Oklahoma - a round trip of just under 10,000 miles - but I'm still buzzing from the amazing time I had there.Johnny Baier invited me over to play at the Hall of Fame event arranged by the American Banjo Museum. It's an incredible place, housing over 400 instruments, each one a rare & beautiful work of art - you could spend a week there taking in all the exhibits. As a ukulele-banjo player I've always been more involved in the ukulele scene more than the banjo, but the great thing Johnny is doing is drawing together all the different types of instruments and players into one big family - and it works a treat. I got to play alongside some of the world's best players in jazz, folk, bluegrass and country - all inspirational in their own way.

As soon as I landed on Thursday night I had a warm welcome fromDoug Parsons who drove me to the hotel where I immediately metPaul Scavarda- a top class jazz musician from Florida - who some years ago, located the family of Ernest Wampola, the great Tessie O'Shea's musical director. Tessie lived with them for her latter years and Paul managed to rescue a huge archive of her personal effects from disposal, including her instruments! It's five years since I originally offered to give a good home the beloved Gibson UB3 that she used in all her films and television shows and we finally managed to arrange it on this trip! As well as bringing the famous uke home to the UK, Paul let me take four files of papers, photos and memorabilia from Tessie's own belongings. It will take me ages to go through them properly. I spent all of Thursday night through to the small hours pulling the uke apart and returning it to its original set-up (Tessie's own vellum and bridge which had been removed during renovation were there in a box) and I made the instrument ready to use in the following day's event.
On Friday, I made a beeline for the museum to meetGina Hequembourg - George Formby's niece who had flown in from Georgia with her daughter Bronwyn. The whole reason for the trip was to induct George Formby into the Hall of Fame for his huge historical significance. I was to play at the ceremony and Gina was there to accept the reward on behalf of the Formby family. We had never met in person so this was a real thrill. We chatted about England (Gina has lived in the US for 50 years), about George and his brothers and sisters - all of whom were involved in showbiz. Gina was charming, and we hit it off right away. Such a pleasure to meet another member of the amazing family that has had a great influence on my life.
The ceremony was held at the top of a 50-storey building and the view was breathtaking. Think Blackpool Tower and then some. After the dinner, each Hall of Fame inductee was introduced by a video presentation and it was quite moving to see our own Lancashire lad George's life story brilliantly described to the assembled musicians and enthusiasts who had come from all parts of the USA. Although many were aware of Formby, few had seen his style played live before and when I took to the stage and played his famous "Leaning on a Lamp-Post" the reception was terrific. Gina accepted the solid bronze award with a speech, and when the evening ended we headed back to the hotel where a jam session in the lobby soon began. Anyone trying to sleep would have had no chance!
On Saturday I spent more time at the museum, and went through the music for the coming evening's concert with pianistRandy Morris, after which we talked about vaudeville for a good hour. What a fascinating and knowledgable guy he is, as well as being a superb player. After watching impromptu sets from Randy, Paul, Johnny and the amazing Pat Terry Jnr, it was time to head to the Theatre in Mid-West City for the BanjoFest concert. An enthusiastic audience of about 700 were there to see NY jazz starCynthia Sayer, bluegrass championship winner Gary Biscuit Davis,Mark Johnson &Emory Lester and I had the honour of closing the show. I think Tessie's uke must have brought me good luck because the audience gave me a dream reaction. 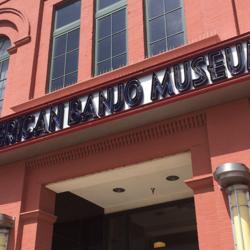 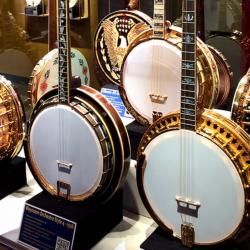 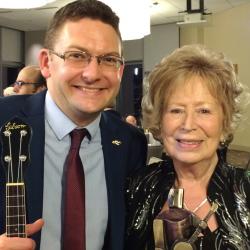